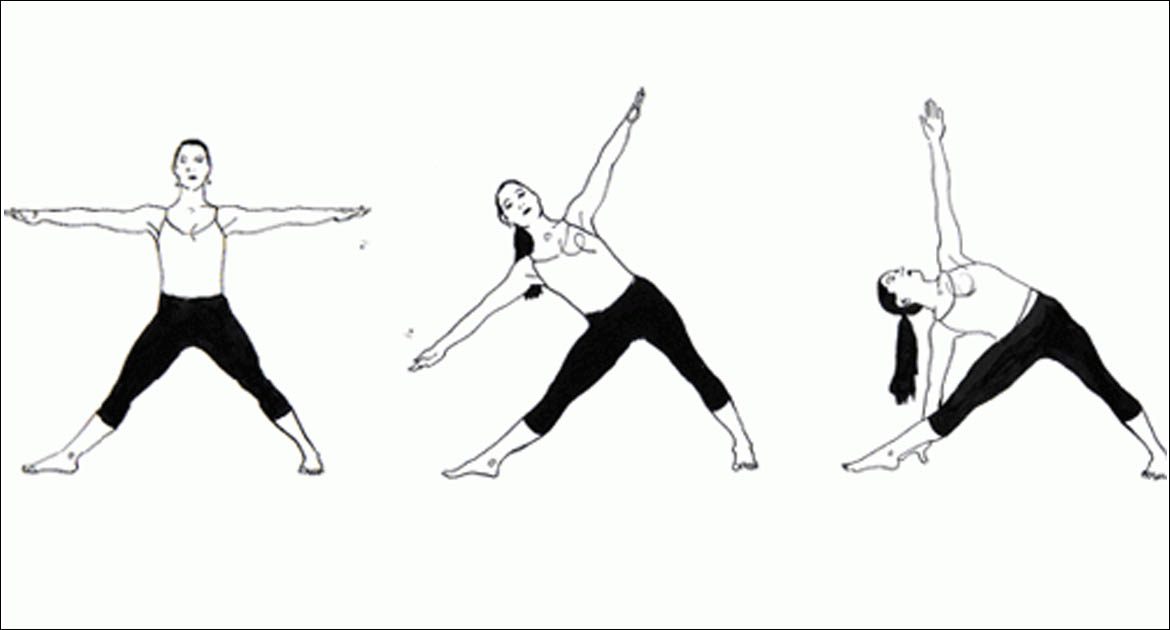 Variation I:Stand erect with the feet more than shoulder width apart. Turn the right foot to the right side.

Stretch the arms sideways and raise them to shoulder level so that they are in one straight line.

Bend to the right, taking care not to bring the body forward.

Place the right hand on the right foot, keeping the two arms in line with each other. Turn the left palm forward.

Look up at the left hand in the final position.

Return to the upright position with the arms in a straight line.

Repeat on the other side, bending the left knee slightly.

This completes one round.

Breathing:Inhale while raising the arms. Exhale while bending.

Inhale while raising the body to the vertical position.

Awareness:On the stretch along the side of the trunk, legs and arms, on keeping the balance, and on coordinating the movement with the breath.

Variation 2:Repeat the basic form, but instead of keeping the upper arm vertical in the final position, lower it over the ear until it is parallel to the floor with the palm facing down. Try not to bend forward, but to keep the body inone vertical plane. Look up at the hand.

Slowly return to the starting position.

Advanced practice: When variations 1 and 2 can be performed easily, they can be done keeping both legs straight.

Variation 3:Stand with the feet more than shoulder width apart and the toes facing forward. Gaze directly in front.

Place the palms of the hands on each side of the waist with the fingers pointing downward.

Slowly bend to the right from the hips while sliding the right hand down along the outside of the right thigh as far as is comfortable.

Do not strain and do not bend forward in an effort to achieve the final position in which the right hand reaches the foot. Flexibility will come with practice.

Stay in the final position for a few seconds.

Raise the trunk to the upright position, returning the right hand to the waist.

Repeat on the left side to complete one round.

Breathing:Inhale while standing erect with the hands on the waist. Exhale bending to the side.

Inhale while returning to the centre.

Awareness:On the stretch along the side of the body, on taking care not to bend forward or strain, and on synchronizing the movement with the breath.

Variation 4:Stand erect with the feet more than shoulder width apart and raise the arms sideways to shoulder level. This is the starting position.

The right arm should be stretched vertically so that both arms form a straight line.

Look up at the right hand.

Hold the final position for a few seconds, feeling the twist and stretch of the back.

Return to the centre forward position.

Raise the body to the starting position, keeping the arms outstretched to the sides.

Repeat to the other side.

This is one round.

Do not lower the arms. Practise 3 to 5 rounds.

Breathing:Inhale in the starting position.

Exhale while bending forward and twisting.

Inhale while twisting back to the centre and when standing up to release the pose.

Awareness:Physical – on the balance and stretch on the side of the trunk in the final position, and on coordinating the movement with the breath.

Contra-indications: Variation 4 should not be performed by those suffering from back conditions.

Advanced practice: Repeat the procedure as described, but place the right palm flat on the floor on the outside of the left foot. On twisting to the right, the left palm should be placed on the floor outside the right foot. This variation gives a far greater stretch to the leg and back muscles.

Dynamic practice: Perform the posture rapidly without returning to the vertical starting position between both halves of the round. The breath is relaxed. If there is no strain, it can be practised for an increased number of rounds.

Sequence: Each variation should be practised separately to increase flexibility and strength. When each can be practised without strain, they can be combined. This series may be performed daily for a few weeks to tone the entire body.

General benefits:This series affects the muscles on the sides of the trunk, the waist and the back of the legs. It stimulates the nervous system and alleviates nervous depression. It improves digestion. It also strengthens the pelvic area and tones the reproductive organs. Regular practice will help to reduce waistline fat.